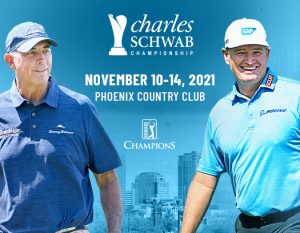 Where: The Charles Schwab Cup Championship will be hosted at the centralized location of the Phoenix Country Club until 2027 due to the great success in 2017, 2018 and 2019. Designed by Harry Collis and built in 1899, the 6,732-yard layout will challenge the best of the PGA TOUR Champions in the season finale to determine the Charles Schwab Cup champion. The Phoenix Country Club was redesigned in 2002 by current PGA TOUR Champions pro Tom Lehman.

Tickets: Good Any One Day Grounds Tickets are just $30

When you buy tickets via the TICKETS Fore CHARITY™ program, 100% of the net proceeds goes directly to a local charity chosen by you.